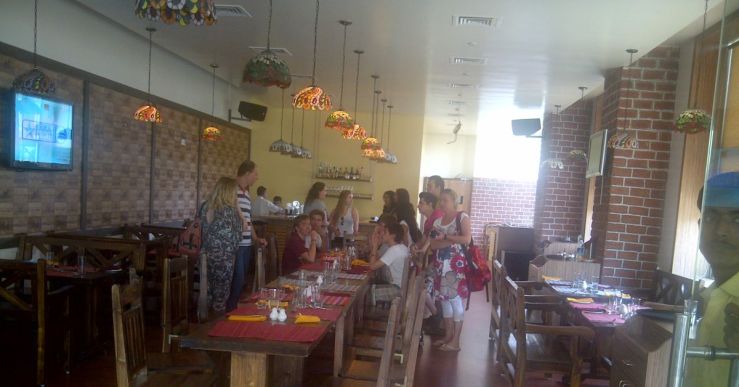 Decided to meet up with friends over the weekend and thought we’d try out a new place. Had heard about one such new restaurant apparently serving Brazilian cuisine which intrigued us, so Flambos Brewpub it was.

Flambos Brewpub is located at the Metropole Building, next to Inox. Considering it was a weekend, the place seemed largely unoccupied, except for one large group (almost 20) of firang students. We settled down to have a look at the menu, and that was when the surprises began.

There was also no drinks menu, though we did see beer and other spirits on the shelves. Maybe they were still in the process of obtaining a licence? Either way, it was dumb not to have a drinks menu. We decided to start with beer, and were told there were just two types available – Kingfisher Regular pint and Kingfisher Ultra, that’s it. We chose Ultra.

Then came the food menu. There didn’t seem to be anything uniquely ‘Brazilian’ about it – not only the menu, but the place, decor or anything else (not that we expected Samba dancers just yet :p

Mostly Italian, Continental in nature, the menu had a list of appetisers, salads, starters, main course and so on, and there was a printed sheet enclosed within – the brunch menu, with limited items. Priced at Rs.399 per head, we thought it seemed a good deal so chose that over the à la carte menu.

Just when we had decided on the starters, the steward came over and requested for the brunch menu sheet, saying he would bring it back in just five minutes. We asked if the restaurant had just ONE print out of the brunch menu, which left him feeling pretty sheepish as he nodded, and us, flabbergasted.

After the sheet was brought back, we ordered a ‘Warm Chicken & Pomegranate Salad’ and ‘Tomato & Glass Noodle Seafood Salad’. Have to say in terms of taste and size of the serving, the former totally trumped the latter. Also, Basa seems to be the preferred choice of fish to serve at most places these days.

Another friend joined in and ordered the chicken soup, which we’d given a miss to, and seemed to like it.

We continued with beer rather than try out any of the other drinks on offer and ordered the main course. The items on that sheet were printed in such a random and haphazard manner that some of the items which looked interesting were actually pizzas!

I kid you not – one example being ‘Grilled Chicken bits, with fresh cheese and Bell Peppers’. Once again, the steward informed us with an apologetic smile that the last four items in the main course were all pizzas.

We ordered ‘Nacho Encrusted Fish & Chips with Tropical Fruit Salsa’ and ‘Chicken Hunters Style in a special red wine and tomato sauce’. They goofed up with one of the orders and served the actual dish at no extra charge. The food was decent, though I found it all somewhat bland and certainly not a tickle for the taste buds. Couldn’t get any hint of red wine in the chicken either. 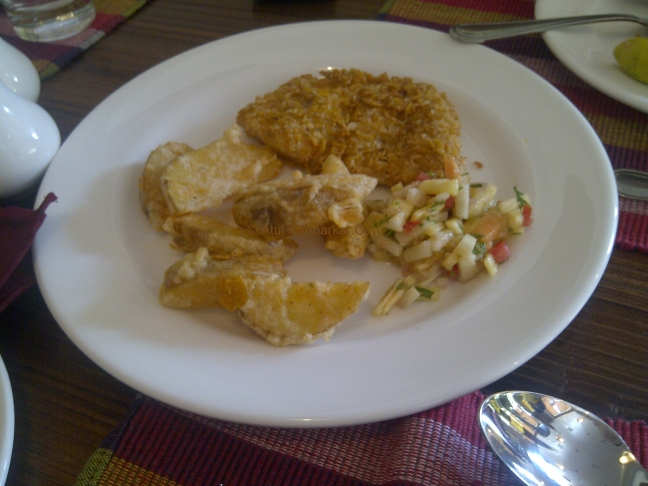 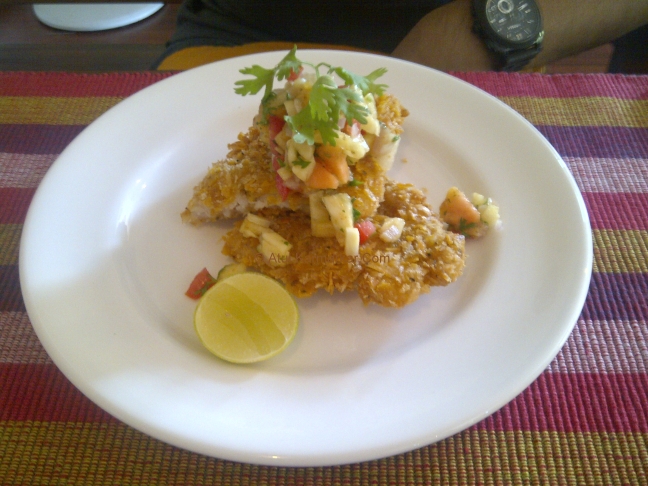 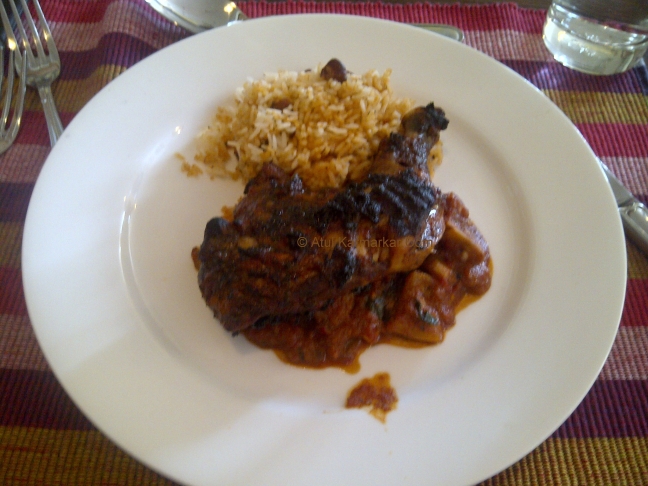 For dessert, we chose Crème brûlée only to be told there was only one serving available, which seemed ridiculous! Once we were done with face palming yet again, we ordered that single serving of Crème brûlée and chocolate ice cream, and instantly regretted it. 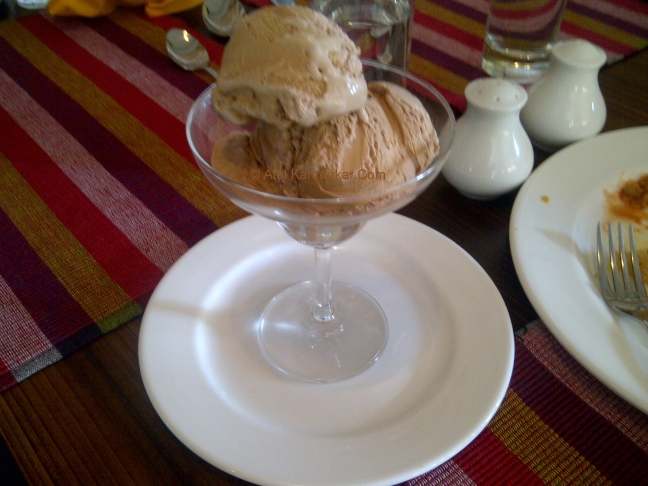 While the ice cream seemed to be Amul and tasted ok enough, the Crème brûlée – oh boy, the caramel was so tough that even tapping the spoon hard didn’t have any effect on it and we actually asked the steward if there was a mini-hammer available! 😀 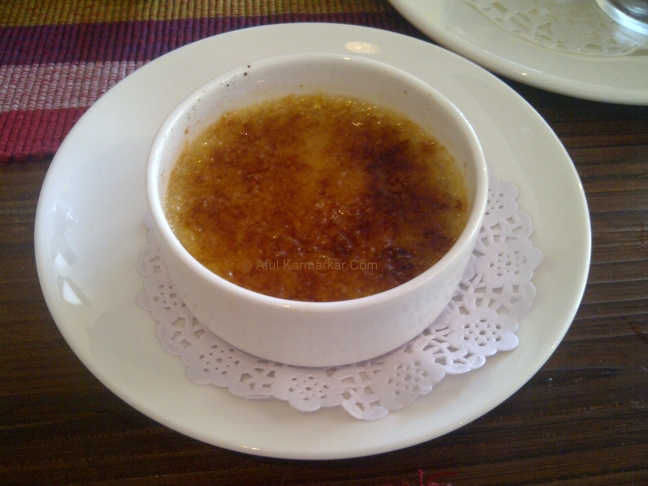 By this time, our entire meal seemed to have become a nice comedy act and for the stewards, being sheepish and embarrassed seemed to be the order of the day and so it was this time too. We returned that serving and ordered another ice cream instead, bringing the meal to a close, and asked for the bill.

Mr.Murphy was waiting to strike again, and we were surprised to see the brunch per head being charged at Rs.449 instead of Rs.399. Not that 50 bucks is a big deal. When we quizzed the steward about it, he said that was the price for the non-veg brunch so we asked him why it wasn’t mentioned anywhere.

Totally confused, he went off to consult a senior steward, who then spoke with the manager, who then called one of the chefs (you get the drift here, don’t you? :P) and they all went into a huddle, before finally getting us the revised bill. Overall, we paid just over Rs.900 per head, which was ok considering the beer consumed.

Oh yes, a final moment of hilarity ensued in the loo where I saw this… but not surprising considering everything else was also “out of order” :p 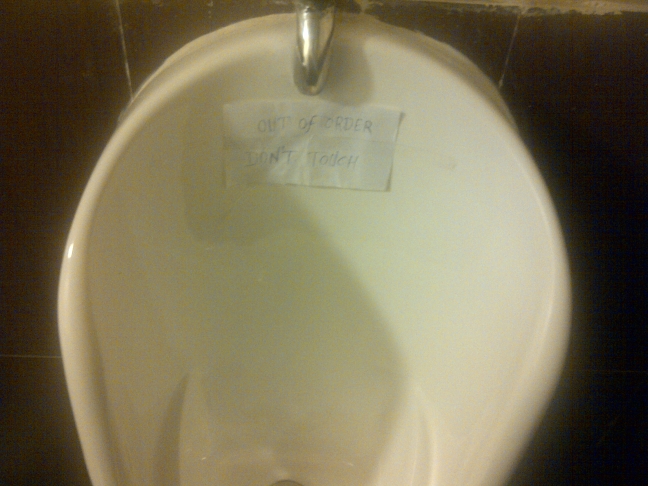 The meal and the overall experience was a disappointment though we may return once to sample the à la carte menu. There have been several food outlets mushrooming across the city and people nowadays are quite discerning too, so Flambos Brewpub needs to get its act together. Oh yes, and also include actual Brazilian food!