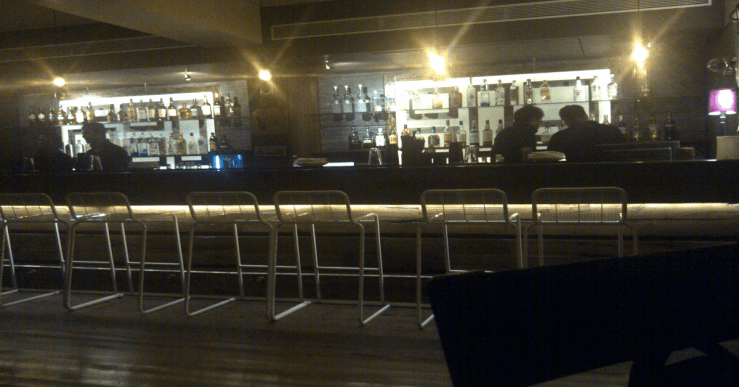 Wasn’t really expecting to check out a new watering hole mid-week. However, a few quick calls between some other friends and a meeting materialised. The majority seemed in favour of Lagerbay – the latest addition to the list of restaurants/pubs in Bandra(W).

Situated where Zenzi used to be, the look and feel immediately reminded me of a cross between an HRC and a sports bar, with the pictures on the wall and Union Jack cushion covers. It is decently sized with well spaced out seating, so conversations can remain private. The interiors are pleasant and comfortable enough. The music playlist seemed random, with songs from all genres and ages playing. The volume was just right, except on a couple of occasions when it seemed louder than needed.

Given it’s name, I was quite surprised to see the lack of beer on tap, reminding me of Kiva Ivy in Pune. The beer menu had 6-7 of the usual beers served everywhere, which we began proceedings with. For starters, we ordered Onion Rings, Chicken Caesar Salad, Chicken Wings and Fish n Chips. Good stuff, though the fish was a tad disappointing.

For mains, we ordered a Mushroom Risotto, Prawn Ravioli, Grilled Chicken and Grilled Tenderloin Steak in Red Wine Jus. Overall, the food was good, though personally I did feel the quantity of the portions was a bit less as compared to the price per dish, or maybe I was just too hungry. 🙂

The drinks of course flowed on merrily and after the beers and Jack Daniels, we tried out the cocktails on offer – Blueberry Cosmopolitan, Sour Apple Martini, and of course, two of my favourites, Long Island Iced Tea and Bloody Mary. Quite well made, though at Rs.450, the Long Island Iced Tea was even more expensive than the one at Touché in Bangalore.

We were feeling quite full and content, so nobody was really keen to have dessert, though mentally I was dreaming of the Tiramisu and Blueberry Cheesecake 😀

All said and done, Lagerbay is a pretty good place and it makes sense to go there with more people around, so the per head cost remains reasonable. They also serve burgers, but only till 7pm, so must try those out the next time, which means I’m coming back!

*Not many pics though – as we all attacked the food and drinks and dishes were served equally, there wasn’t really time to ‘set up’ the dishes for a pic.