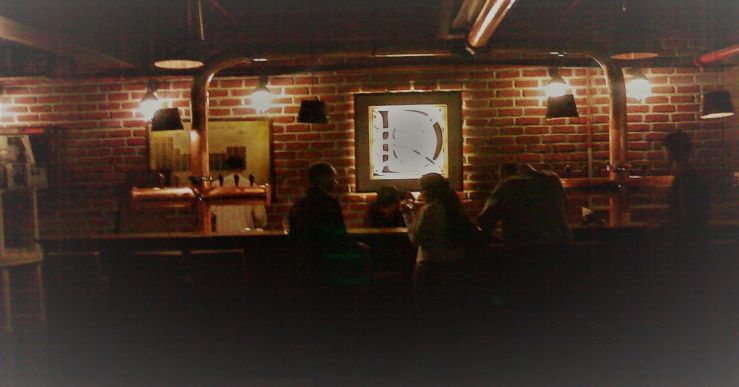 Friday evening plans were being discussed, and initially the choices were between a friend’s place or Kiva’s / some other place, when we decided to check out Doolally Pune, home to the city’s first microbrewery and derived from “Deolali”, an army cantonment near Nashik.

I’d been meaning to visit the place ever since I ‘met’ one of the co-founders (Suketu) on Twitter 2-3 months ago. At the time, I’d tweeted about getting some Belgian beers from Bangalore and he replied saying I just had to visit Doolally to check out the real thing. Added to this was the fact that it was located at The Corinthians Boutique Hotel in the NIBM / Kondhwa area, “our” side of town or “nadi ke us paar” as we keep saying.

So Doolally it was and we set forth around 8 pm. The place is a treat for the eyes, with it’s brand new shining steel vats behind glass doors, lots of wood work, well spaced seating both indoor and outdoor, and an extremely relaxed air about the place. There was a live band playing as well, though frankly, the less said about it, the better.

It was a pleasure to finally meet Suketu and he instantly made us all feel at home. He had some other guests to attend to as well, but recommended the Dark Lager as he left, which pretty much made up my mind.

Apparently, the place has Happy Hours from 6.30 pm to 9 pm and the steward said we were just in time (8.59 pm) to opt for it. We readily agreed to try each of the beers on offer; 5 beers (Premium, Wheat, Rye, Cider and Dark Lager) for 6 people, the Dark Lager getting a second nod. Only later did we realise that free samples were on offer! 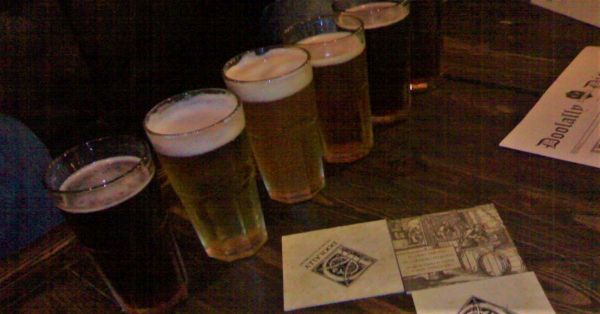 Now the big difference at Doolally is that you have to pay upfront as opposed to paying the bill at the end. I guess this is also one way of keeping people sober 😛 They have a quaint system of charging in terms of Dimes (Rs.100) and Nickels (Rs.10), which are actual coins by the way, so we started off with five fine brews and ordered some starters too.

The beer was absolutely marvellous and we all had a swig from each of the glasses, allowing us to decide on what was to be our chosen “poison” for the remainder of the evening. As there were six of us, the choices opted for fell neatly between Adam’s Folly (Apple Cider), The Weiss Man (Wheat beer) and Bob Barley (Dunkel / Dark Lager) and we ordered a pitcher of each. 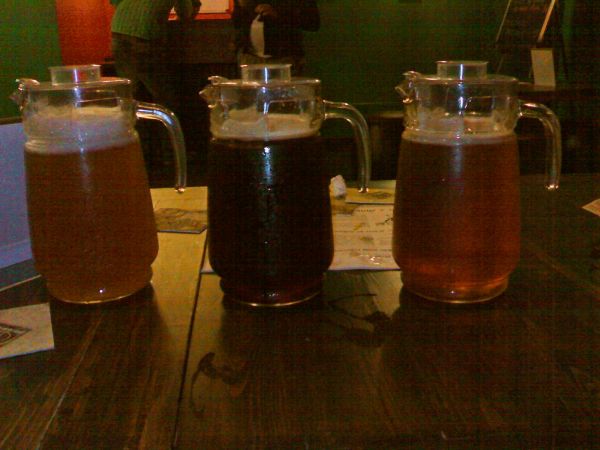 While the beer flowed freely, I must say the quantity of food per serving left a lot to be desired. In fact, some of the stuff seemed enough for just a single person, let alone six hungry souls. Apparently, the food aspect is managed by the Corinthians guys, not Doolally.

All this time, the band was playing some ear splitting music and the vocalist was getting to be a strain on my eardrums. I jokingly mentioned to Suketu that even I sang better, to which he replied that if I could put together a band, I was in! So what say, guys?

It was fun to read the in-house newspaper, the “Doolally Dispatch”, as well as the pithy comments on the coasters (will upload pics later) as well as the posters on the walls.

It was a fun evening, and we must have downed close to nine pitchers among us, as we left by midnight. I was there a couple of days later as well for the Sunday Brunch, which at Rs.650/- for unlimited food and beer, is a much better option, and there are no stares of disbelief when looking at the food (or lack thereof) on one’s plate.

It is an ideal place to laze around on a Sunday afternoon with freshly brewed beer available on tap while soaking in the relaxed ambience of the place. One thing is pukka for sure, there are going to be a LOT of meetups at Doolally for a long time to come!