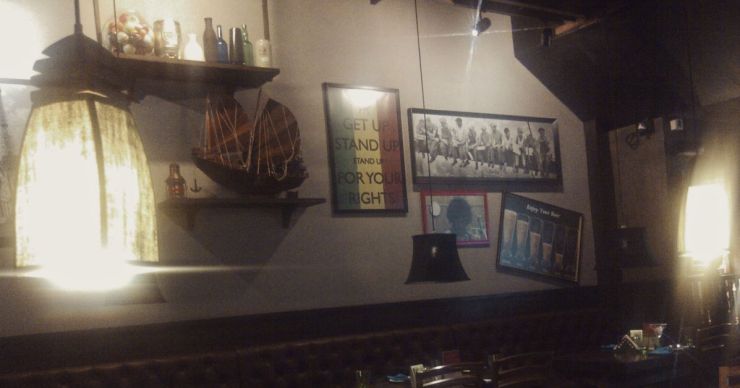 Had been meaning to check out some new restaurants in the city and Incognito kept coming up in recommendations. Also wanted to catch up with a friend during my Pune visits, but somehow schedules never matched. Finally, they did and we decided to meet for lunch last Sunday.

As she’s a vegetarian, I asked her to suggest places that she felt were suitable, and little did I realise what a mammoth exercise that would turn out to be 😀 Most of the places that came up were regular haunts, and I was keen to try out something new, the recent ‘new place’ experience at Flambos Brewpub notwithstanding 😛

Incognito Pune is a recently opened restaurant in Phoenix Marketcity Mall at Viman Nagar. We reached just after 12 pm and were among the first customers of the day. Once seated, we had a look around. Even though it’s inside a mall, the place is kinda dark, but with a pleasant ambience. There was some nondescript music also playing then. The walls are filled with all kinds of stuff – from smart-ass posters to other paraphernalia and even a model ship.

We decided to start with the Incognito Draught beer. There was a choice of 200 ml and 400 ml, and we chose the former. While I knew it wasn’t much, the slim, narrow glass in which it was served made it look like tonic water or some medicine.

The food menu is quite comprehensive and it is impossible to do justice to it in a single sitting. We started off with salads: non-veg for me, veg for her. I chose a Warm Cajun Chicken Salad and she a Gazpacho Salad, both with garlic bread.

I liked the presentation and it was quite good too. The idea was to start with this and then move on to the main course, but coupled with the beers, the salad itself was quite filling and we just didn’t seem to be able to eat anything more.

The compromise was a plate of Nachos with cheese. For drinks, we went with the cocktails, and ordered a Margarita for her and Long Island Iced Tea for me. While the LIIT was quite good, the nachos were a complete let down, right from the presentation to the quantity and the taste. In comparison, the nachos at Cream Centre were in a class by themselves.

By now, the place had begun filling up and that brings me to one issue I have with the place – the tables are too close to each other, like this one – where I could have easily reached across to my left to the table beside us, not to mention conversation also being quite audible. The music was now mostly ’80s, but the acoustics seemed off and too much of a bass thump ruined the listening pleasure.

The plan was to head out to Koregaon Park for dessert, as she was keen to try out Red Velvet cupcakes. However, we decided to order dessert here itself and I must say I’m glad we did. Another friend who had been here a day earlier had recommended the Chocolate Walnut Brownie and we both decided to try it out.

The presentation was gorgeous and it was fabulous, besides being rich and heavy, not that we were bothered. It was clearly the highlight of the lunch and we finally “staggered” out of Incognito around 4.30 pm, almost five hours since coming in. The overall cost for two came to just over Rs.2,000 which I’d say was well worth it, except for the nachos. Another visit is on the cards for sure.

Incognito Pune is the brain-child of Chef Ravish Arora and Rajendra Kelshikar – both of whom worked at Hotel Blue Diamond before collaborating for this venture. Among other brands, their company Inn-Venue Hospitality also runs Baker’s Basket and the hugely popular Polka Dots restaurant.