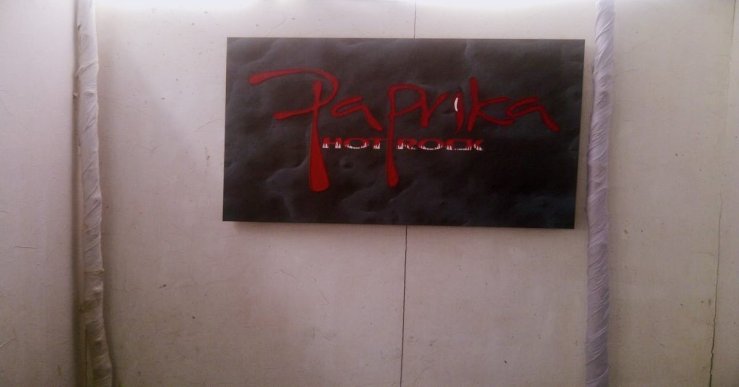 I’d been to Paprika Hot Rock a couple of times before, and the experience being good on those occasions, it seemed the perfect place to head to for a Sunday brunch.

It is located at City Point, off Boat Club Road; yes, the same complex which houses Mainland China, Sigree, La Dolce Vita etc. Getting there is a breeze and parking is mostly available. The name “Paprika Hot Rock” of course has to do with their concept cooking method – where food is cooked on a hot volcanic piece of rock at your table. This can be sampled only in the evening, though. This ‘only in the evening’ logic kinda reminded me of the molecular gastronomy at Caperberry in Bangalore.

The place itself is done up well and has quite a cool, Mediterranean look and feel about it. There is lots of white colour everywhere, and those curtains do a good job of being part of the decor besides offering a degree of privacy.

Seating is both outdoor and indoor; the former is a sit-out with hard back wooden chairs and the latter has a lounge seating. We chose to sit out as the buffet spread was placed outside, and it seemed reasonably pleasant at the time. 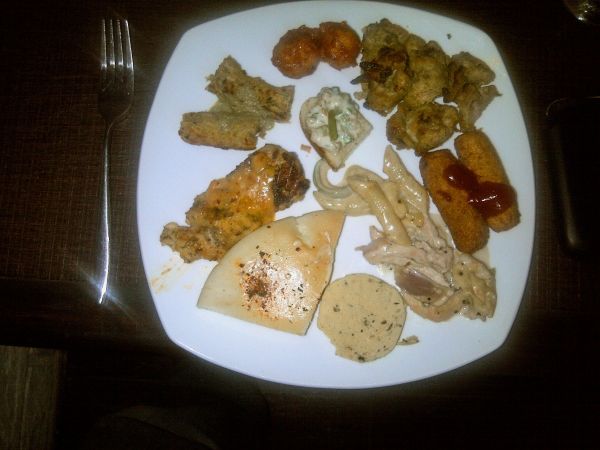 The spread was quite varied and good. The chicken kebabs were succulent along with corn croquettes, meatballs in tomato sauce, pita bread, hummus, chicken terrine, lasagna, Moroccan fish stew, malvani chicken and some veg stuff that I didn’t really notice much. The roast chicken salad was good too. 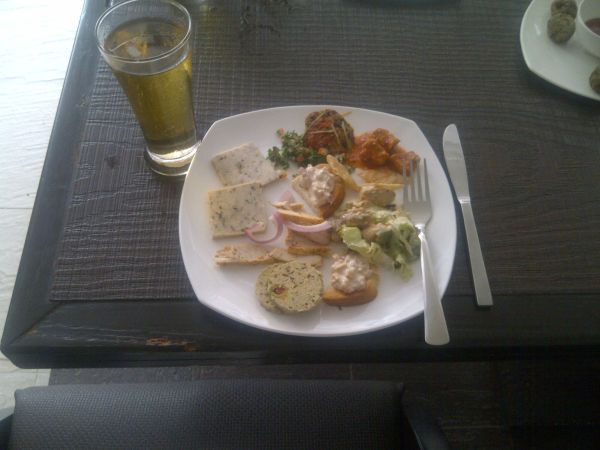 The food on offer was excellent and I really liked the variety – a mix of Indian, Continental, Mediterranean (mainly Lebanese, Italian, Spanish) and we all went back for seconds.

Now for some of the things we wouldn’t like ‘seconds’ of :-p

The choices for dessert weren’t really all that great, and as they were placed outside, a lot of the cream and icing from the pastries was becoming watery and close to melting. No doubt the portions were being replenished – but not at the rate at which we’d have liked them to be. There were flies hovering around the buffet table and parking themselves on the desserts – which were kept uncovered!

The fans were placed too high, and one wasn’t revolving – causing a fair bit of discomfort. I recall them being placed slightly lower the last time I was here. One of the fans was placed in such a manner that when it revolved, most of the air was being directed outside the seating area, and the staff didn’t seem to know how to fix that or point the fan our way. Reminded me of the Rangeela scene :p

The pasta counter was kind of DIY types and at the time of placing the order, we’d asked for Penne pasta as well as broccoli and other ingredients. Instead, we were served Farfalle, or “butterfly” pasta, and capsicum! Reason – both Penne pasta and broccoli weren’t available, which should have been told to us upfront. While ordering the mocktail, we specifically said no ice – but ended up getting one with three ice cubes in it!

It was getting pretty warm by this time, especially with the useless fan, so after I finished the wine, I decided to cool off with a beer. The steward completely forgot about the order and it took 15 minutes and a reminder before he finally brought it.

Lastly, we were quite surprised to get a bill for SIX buffets instead of FIVE – pretty careless, and which again took around 15 minutes to rectify.

Maybe all this comedy of errors was a one-off and overall, notwithstanding the above, I’d say the place is nice, the food is really good and value for money. However, the quality of service and overall experience left much to be desired and needs to be sorted out.