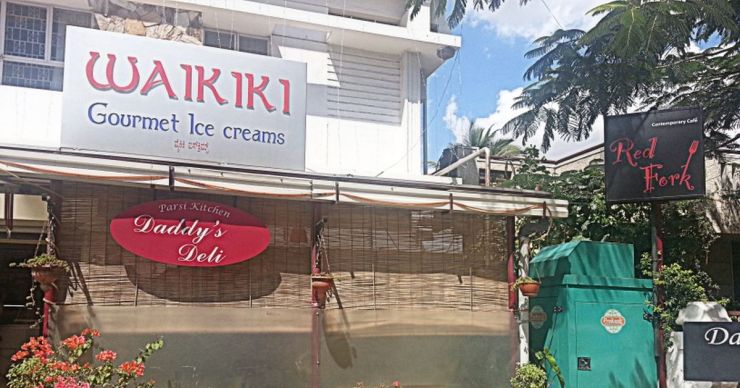 A lazy Sunday like any other, and initial plans of a quick breakfast soon morphed into brunch, and as we drove around the streets of Bangalore debating on a suitable place, it became late and was time for lunch. We decided to check out Red Fork, located on 12th Main at Indiranagar.

Red Fork Bangalore shares space with an older eatery in the same premises, Daddy’s Deli, which serves Parsi food. There is indoor and outdoor seating, and the entire ambience is lazy, laid back and exactly the kind of place you want to land up at on a Sunday afternoon. As it was getting warm, we sat indoors. 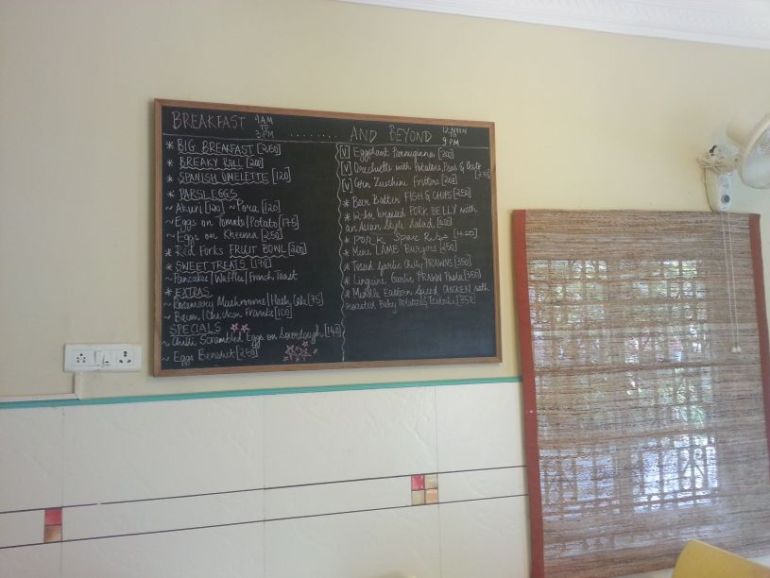 We ordered a Spanish Omelette, Beer Batter Fish and Chips, Moroccan Mini Lamb Burgers, Corn & Zucchini Fritters, and some Chilli Scrambled Eggs. There was huge temptation to try the Pork Spare Ribs, Braised Pork Belly, Braised Lamb Shoulder or the Honey Braised Duck with Orange and Olives, but the slightly late breakfast we had meant we wouldn’t be able to do justice to all this.

For drinks, we went with Iced Tea and fresh lime soda, though they do have a choice of red, white and rose wines from Big Banyan, Sula and Nine Hills.

It did seem that our order took a while coming and that’s the only issue we had – maybe it was the Sunday rush or they were short-staffed. However, all sins were forgiven once the food was served 😀

The Spanish Omelette was lovely, the lamb mini burgers juicy and mouth watering, the fish (thankfully pomfret, not basa which almost every place serves now) and chips were a delight with no dripping oil and the chilli scrambled eggs were as promised. The only letdown were probably the corn and zucchini fritters which somehow lacked flavour and were too mushy / pasty.

Red Fork and Daddy’s Deli are run by the same family, and our hostess Zarine was very attentive to our needs throughout the meal. We learned that her husband takes care of the back end operations (admin, accounts etc) while her son Xerxes is the Chef behind Red Fork, churning out these culinary delights. Another tidbit – they own the Waikiki brand too – which took me down memory lane. When we lived in Bangalore in the ’80s, Waikiki to us meant ‘the burger place’ 🙂

Overall, we loved the food and ambience at Red Fork. Already looking forward to my next Bangalore trip.