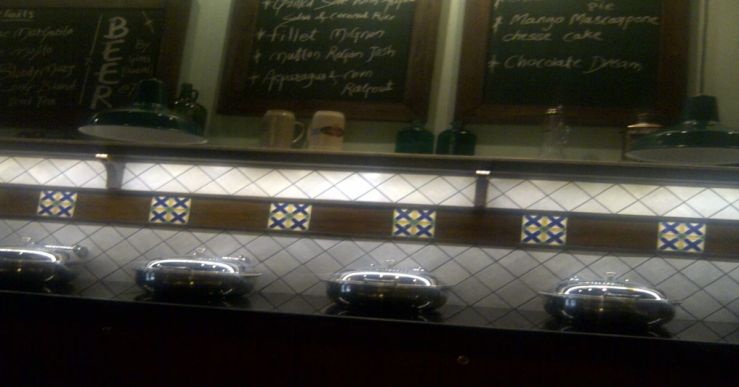 Planned to meet up with a couple of friends for brunch a couple of weeks ago, and one of them was particularly keen to dig into a steak. We initially thought of Cafe Mocambo Grille, but on calling up, I was informed they were open only till 5pm and then closed for the next 2-3 days. We weren’t all that sure of the quality of service we’d get that day so decided to skip.

I’d mentioned earlier that another visit to Incognito was called for, and so it was. We ordered Long Island Iced Tea for drinks and then for starters, began with the Bacon and Water Chestnut wraps.

Gosh, they were a treat and that crispy bacon glazed with sweet chilli mayo was just melting in the mouth. This dish itself made the visit worth it. Too bad the pic doesn’t do it justice. Will take a better pic next time. Thanks to word of mouth, this has become like a signature dish at Incognito Pune.

We also ordered an Antipasti platter (veg), and were asked to choose three options – we went with Pickled Feta, Garlicky Roasted Eggplant and Marinated Mushrooms. Also got a basket of Garlic Croûtes along with it.

This was a bit of a let down. The Feta was too salty and the Eggplant was limp and totally bland, with no hint of the ‘garlicky’ anywhere. The mushrooms were pretty good though.

For the mains, ordering the Filet Mignon (medium rare), was a no brainer. For variety, we decided to order other dishes among fish, pork or chicken, eventually settling on Chicken Cacciatore (grilled chicken with onions, tomatoes, mushrooms and red wine sauce, along with potatoes and veggies) and Schweine Braten (traditional German roast pork marinated in beer and caraway seeds, served with apple raisin jus).

The Filet Mignon was cooked to perfection and the meat was absolutely succulent and a joy to consume. Very few places get it so right, and Incognito Pune got it spot-on. The Chicken Cacciatore was good too, however the pork in the Schweine Braten felt a bit tough and leathery at times. Maybe it was ‘old’ pork or was in the freezer too long.

Only two of us decided to have dessert, so we decided on Chocolate Crème Brûlée (with Belgian chocolate, kahlua flavoured) and Apple Crumble with vanilla ice cream.

The presentation was once again lovely and both dishes came up to expectations. We’d been there almost 4-5 hours and were feeling like content fat cats by now. No surprises with the bill too, at ~3K for three of us, making it a Sunday well spent. This place is becoming an addiction for sure 🙂