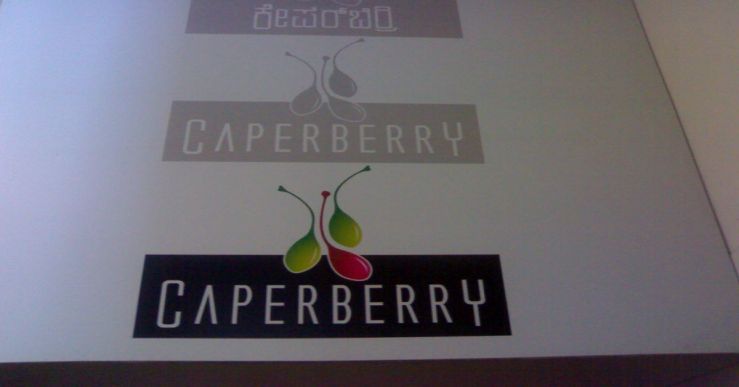 Had heard from friends about Caperberry Bangalore by Chef Abhijit Saha, and their molecular gastronomy, so that was definitely on the agenda during this short visit to Bangalore.

Flew Kingfisher Red this time, and I was informed before that there would be no in-flight entertainment, no blankets or pillows, and no choice of cuisine. Well… the person telling me this was out of touch with reality coz I watched the Autocar show and a bit of ‘Luck by Chance’ on the in-flight telly. The food was pure veg and while I don’t have any problems with that at all, the upma was orange in colour… something I’ve never had before. Also got a crumpled croissant and a bowl of fruits, mostly loaded with papaya, not really my favourite! :-p

Caperberry Banaglore is a restaurant and tapas lounge, located near Manipal Centre on Dickenson Road, in the same building as the Tanishq showroom. The timings are 12.30 pm – 3 pm and 5.30 pm – 11.30 pm, so we were a bit early. This gave me an opportunity to check out the place.

From outside, the entry to Caperberry isn’t all that great, but once you enter, there is a lounge and a decent bar, which you need to pass as you move on to the restaurant. The seating is comfortable though it could have been more well spaced out. Apparently this is limited to 28 covers only as we were told, to ensure all diners are adequately taken care of. 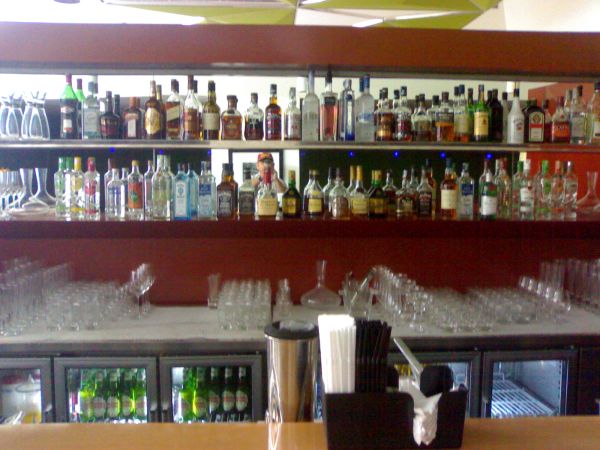 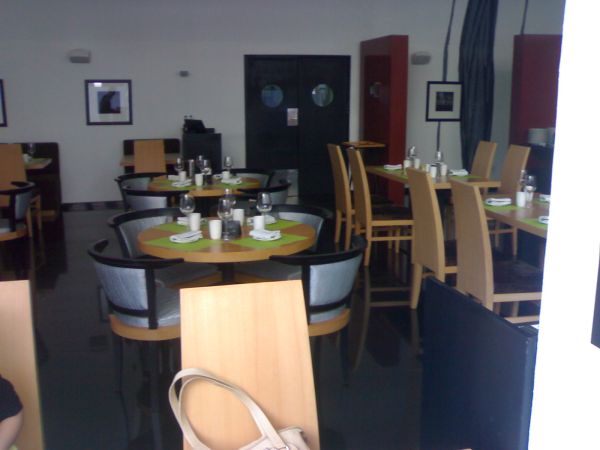 Unfortunately, we were informed that the molecular gastronomy cooking is done only at night, not in the afternoon. As we were served the complimentary breads and dip, we had a Carlsberg and took a look at the menu that was on offer for the afternoon, and it was quite interesting. We chose the 4 course menu, which at Rs.550 each, seemed quite reasonable.

Meanwhile, we loaded up on the starters, and wow, they seemed to be a meal in itself. I could see some chicken with pineapple, lettuce, roasted potatoes in mayonnaise, several types of cheese, noodles, mushrooms, marinated olives, plenty of other stuff at the counter, and a glass of Gazpacho, as well as some pasta with chicken. 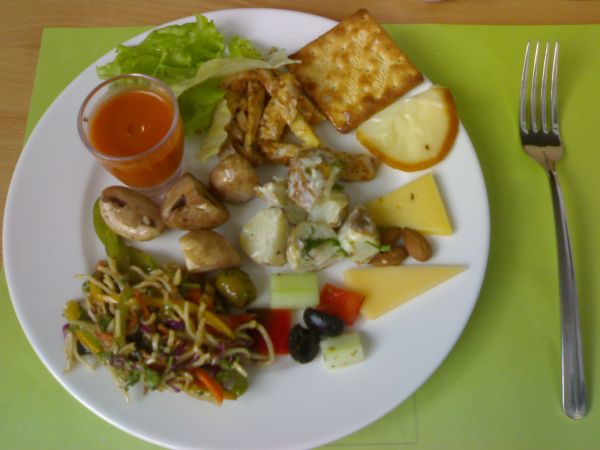 Quite a feast to snack on, and the mains were yet to arrive, which they did shortly.

There was also dessert but after all this, but I was too stuffed to even think about it… and regretfully, let it pass. Caperberry Bangalore is a pretty good place, serves excellent food, the stewards are attentive without being obtrusive and overall, I’d say it is totally worth it! Do check it out.