An evening at the Sagar Plaza Formula One Sports Bar 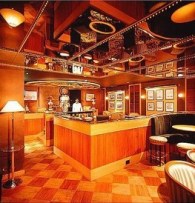 Was chatting with a friend about the Turkish Grand Prix, and how some years ago, we used to watch the race each Sunday at a pub over pints of beer. The talk turned to the Formula One Sports Bar at the Hotel Sagar Plaza, and if it was worth a shot going there again.

It was ages since I’d been there of course, but a quick call to the hotel confirmed that the bar was very much in existence, and the receptionist sounded almost shocked when I asked the question. 🙂 As expected, there was the usual faff about coming early and stuff, first come first served and all that blah.

Come Sunday evening, and there were a few drops of rain, but nothing much as it turned out. I reached a bit early and headed straight for the bar, and oh boy… what a change ! The seating arrangement was not like before and it seemed much more crowded and stuffy, like they had decided to just dump as many seats as was humanly possible !

There were around 15-20 people already in the bar, so anyway, the race started on time at 5.30 pm, and so did we. 🙂 There was a cover charge of Rs.250/-, but what pissed me off was their insistence of serving only Fosters beer during the race. I wasn’t too keen to have a vodka or whiskey that early in the evening anyway, so we settled for a pint of Fosters (Rs.80 each), along with some fries (bloody expensive).

The projector screen wasn’t all that great either and the weird railing on one side of the seats made it difficult to see the lower half of the screen so we shifted to a different location. That was only only marginally better, as someone’s head was nicely obstructing the screen. Just when I slightly shifted my chair to get a better view, another guy came and plonked himself behind the first guy, a little to the left, which meant instead of seeing the lap timings and track positions, I only got to see two bobbing heads in different directions ! 😛

We decided to order stuff to eat, and though there really wasn’t much choice, it was ridiculous to see a chicken sandwich and chicken burger being priced the same (Rs.150). Wasn’t too great anyway, with the burger patty spilling out of the buns, and watery tomatoes to boot, which totally soaked a couple of tissues as well.

The race itself was ok, with Button taking the title to grab his sixth win in seven races this year. An amazing turnaround for the Brawn GP team. Towards the end there was a bit of excitement as Vettel, who started on pole and then lost it during the pit stops, tried to hassle his team mate Mark Webber. His race engineer even said, “Don’t push it, Mark is faster”, but Vettel didn’t seem to care and only went even faster. Webber, till then coasting along, got a rude wake up call and upped his pace, but only just, and finished second with Vettel grabbing the final podium place.

Was an ok evening I guess, though we certainly ain’t going back to the Sagar Plaza F1 sports bar anytime soon.. and yes, the icing on the cake for the day was Federer winning the French Open… Finally !! 😀

Around Pune Food Formula One