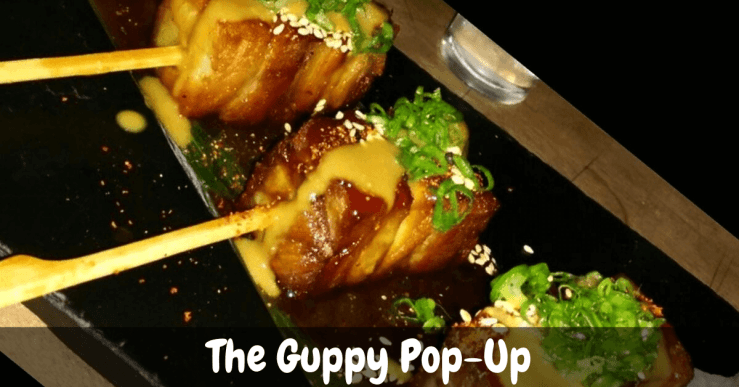 An Evening at The Guppy Pop-Up by Ai, Olive Bistro Pune

Planned to catch up with friends over the weekend and we had almost decided to meet at one of the breweries when the Guppy by Ai pop-up came into focus. Originally based at Delhi, they had just concluded their pop-up at Olive Mahalaxmi in Bombay before touchdown at Olive Bistro in Pune.

Living in Pune, there have been very limited options to have Japanese cuisine, though Bombay fares slightly better in this regard. Thankfully, in our group of four, three were Japanese cuisine ‘veterans’ and I was the only n00b – so no worries in terms of what to order and look out for 😀

Another friend had been to the preview and and said it was good, so we booked a table for the opening day on Friday, 21-Aug, and landed up there at 8 pm. A section of the indoor area has comfortable lounge seating and that’s where the drinks and and small plates were served.

We met Head Chef Vikram Khatri and besides discussing the cuisine and what was being served, asked what he’d recommend. He suggested the Prawn Gyoza (black tiger prawn pot stickers, pan fried), Chicken Nanban (marinated and tossed in Worcestershire sauce), Chicken Karaage (soy and sake marinated fried chicken), California Roll (crab, cucumber, avocado, tobiko). He also mentioned the Spicy Tuna roll – and then said salmon was available too. We unanimously voted for the Spicy Salmon Roll.

The main course is served outside and they have a separate section for the Guppy pop-up; based on the set-up, it seemed to accommodate 60-70 covers. We ordered the Guppy Signature Pork Belly – slow braised, glazed with soy honey, and served with mustard miso sauce. So crispy, succulent and melt-in-the-mouth – for me, this was easily the highlight of the evening, and certainly something I’d go back for!

The Chashu Ramen (egg noodles in a pork and soy broth, simmered for 72 hours, served with boiled egg, pork crackling, spinach, seaweed and corn) was something we were eagerly looking forward to. It was decent, though somewhat underwhelming in terms of our expectations. Chef Vikram clarified later that the broth was a fusion, catering to local taste. He did assure us that it could be made differently next time. This was only the first day, and he mentioned they planned to add more dishes as well as the momentum picked up.

We weren’t keen to have any more drinks, but on an off-chance, asked if any sake was being served. The steward initially said there wasn’t any available; the manager said likewise, and that they were expecting some stock from Bombay. To our surprise and delight, he turned up a few minutes later, confirming they had a bottle, and we were only to happy to have sake shots. I was probably having sake after almost 3-4 years. Super stuff, wish we’d had more.

Just as we thought we’d call it a night, Khodu Irani (the owner) suggested we try the desserts, especially the Nashi Pear Pie. We thought we’d share it among us, but were too content and satiated to go ahead so dropped the idea.