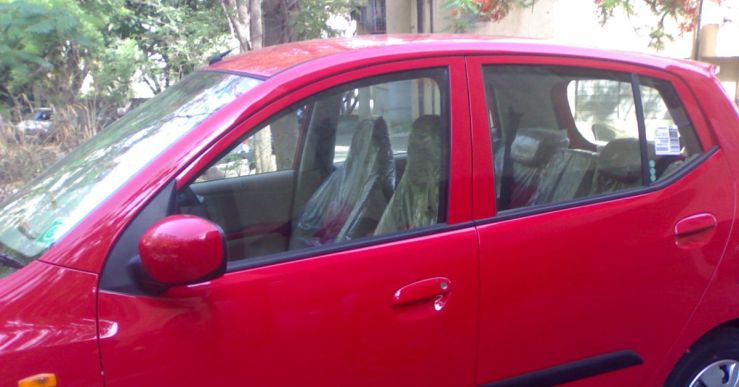 The Hyundai i10 Kappa Sportz… finally!

So, finally… After all the numerous test drives to evaluate the cars currently available, I’ve made my choice… and it’s the Hyundai i10 1.2 Kappa Sportz with automatic transmission.

There were quite a few options to choose from, and while initially I thought of buying a sedan, I wasn’t keen to taking a larger loan just to buy a car. I’d already driven several cars since last year, and given the current traffic scenario, for some reason I was set on getting a car with an automatic transmission. Had driven the i10 1.1 as well last year and it seemed fun to drive, so wasn’t considering other brands then. I was also told a 1.2 L model would be launched soon, so decided to wait.

When I saw the trim of the i10 1.2 Kappa Sportz model, I instantly fell in love with it and knew I just had to have it. I was told this was available in only two body colours, Black and Red. No prizes for guessing which one I chose ! 🙂

I had initially approached Sanjay Hyundai (where I’d done the test drive) but the guys there kept on changing the actual amount payable each time I approached them. At times they said insurance was free (included), at other times they said it was a limited period scheme which was over etc etc. They also didn’t appear too proactive in terms of offering other freebies or a better rate, so I went over to Kothari Hyundai to see if they were any different.

The guys at Kothari Hyundai were equally lazy and it was a frustrating experience to keep visiting their showroom at Tilak Road for every little thing. Added to this was the fact that the two guys I was dealing with didn’t seem keen on letting me know about other formalities to be completed and each time, I had to call them and ask what was the next course of action.

Eventually, everything was sorted out, and I finally went ahead with the purchase. It felt great to drive though of course, I still had to return to the showroom for getting the number plates fitted along with the mudflaps, steering cover, rubber floor mats etc etc that were part of the deal along with Rs.150 worth of fuel (yeah I know, not much!)

I did get a LOT of feedback from friends about whether the automatic transmission was a good choice, and all I can say right now is… Yup, it certainly was. Personally, while I love the driving experience of a manual transmission, I think we’ll soon have to move to automatic transmission seeing the steady deterioration of roads, traffic and common sense among commuters!

How the Hyundai i10 fares in the long run is something only time can tell. Will post more details and actual driving experiences as the days go by, along with stats on mileage etc… So stay tuned 😀