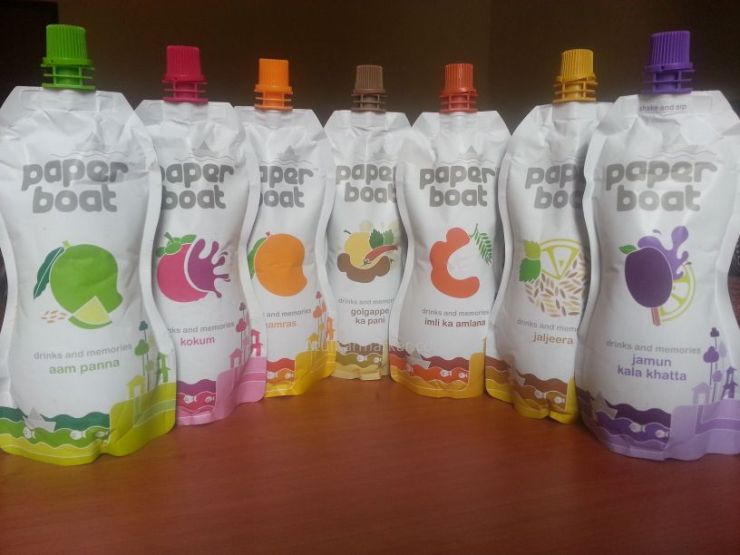 Received a mail via the blog’s contact form a few weeks ago from Hector Beverages, the company behind Paper Boat Drinks (and Tzinga). They had some interesting sounding new drinks and wanted an opinion about how they were – good or bad.

Intrigued, and as always, I first checked out their website to know more about them. It is quite an interesting site and has enough of nostalgia to remind you of your childhood, besides how they conceived the name. Do have a look.

The Paper Boat drinks arrived by courier some days later and once I opened the box, there was a cute looking orange bag, which contained seven different types of drinks. Having seen them on the website, I initially thought they were plastic bottles, but once I opened the bag, they seemed to be more like pouches. As the blurb on their site says,

Paper Boat pouches are made of a four-part laminate. The two outer layers are a blend of proprietary polypropylene and polyethylene. This makes the pack withstand extremes in pressure and heat while at the same time being easy to print upon. This is the one time you can actually judge something by its cover.

The penultimate layer is made of bonded aluminum. This is to keep any form of moisture and vapour entering the pack and tampering the goodness of the drink inside. Of course this layer makes no contact with the drink. That’s the job of the inner (and final) layer. This layer is made of virgin, food-grade polypropylene which keeps the content fresh, safe and tasty.

The packaging is quite attractive, strong, portable, and easily disposable (though not recyclable as of now). The capacity is 250ml, and they’re decently priced at Rs.30 each. 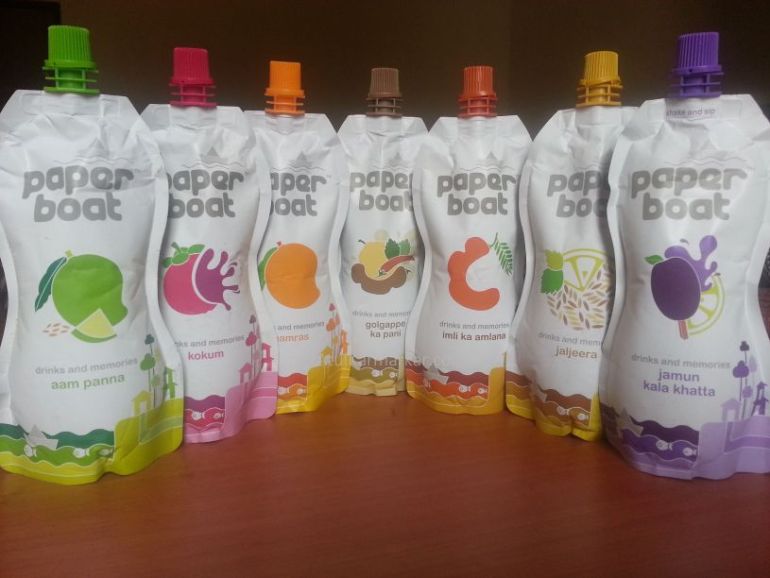 Once refrigerated, we decided to do the honours with the King of fruits, and started with Aam Panna followed by Aamras. The former had a distinct taste of rock salt and the mango flavour probably isn’t as much as in the homemade variety, but was quite refreshing. Aamras was good too, though it didn’t seem very different from the other mango juices in the market.

A few days later, we tried the Jamun Kala Khatta, Jaljeera and Kokum. All three were absolutely spot on and delicious. Probably the best of the lot. I was expecting the first one to be like the Rasna kala khatta mix we had as kids. No way, this was totally different and we loved the subtle hint of jamun. Jaljeera and Kokum were the perfect drink for a hot summer afternoon, and we were smacking our lips even several minutes after they got over.

Two days later, we had the Golgappe ka paani and Imli ka Amlana. While the former was decent, we didn’t really enjoy the latter much.

One issue is the percentage of sugar overall, which is quite on the higher side. Having it occasionally shouldn’t be a problem however though opinions may vary on that front. Maybe going forward, Paper Boat can introduce other flavours like Watermelon, Guava or even Litchi. Hopefully, soon 🙂