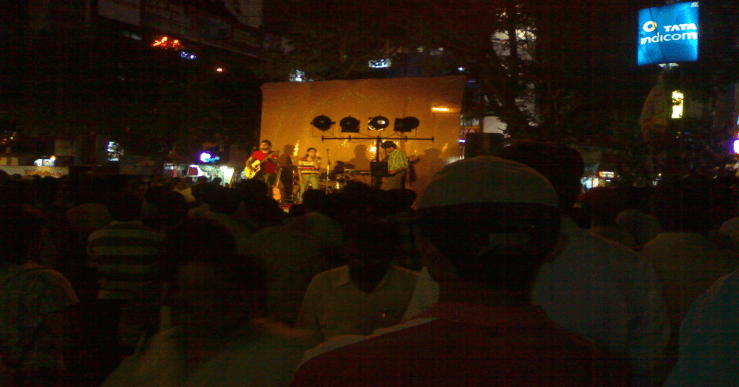 Visited the MG Road Walking Plaza after a pretty long time yesterday. Keeping in mind all the traffic related chaos due to scarcity of parking arrangements, the tendency has been to mostly stay away from this area on Saturdays.

However, I had some other work as well, and also happened to meet a friend over there. It was interesting to watch a live band perform just as the sun was about to set.

We weren’t all that close to hear either the name of the band or it’s members. Initially, the lead vocalist belted out popular KK numbers like ‘Pal’ and others. As the evening wore on, we found ourselves returning to the area where they were performing, and the only female member of the band, also a vocalist, was introduced. Didn’t catch her name either.

The announcement was greeted by a lukewarm response which then gradually turned into a much more appreciative applause as she came to the end of her first song, Aao Na from the movie, Kyun, Ho Gaya Na. She had a pretty impressive voice and one which did not break, though it sounded a wee bit stretched as she hit the high notes. Others songs followed, and the audience too joined in. Quite good.