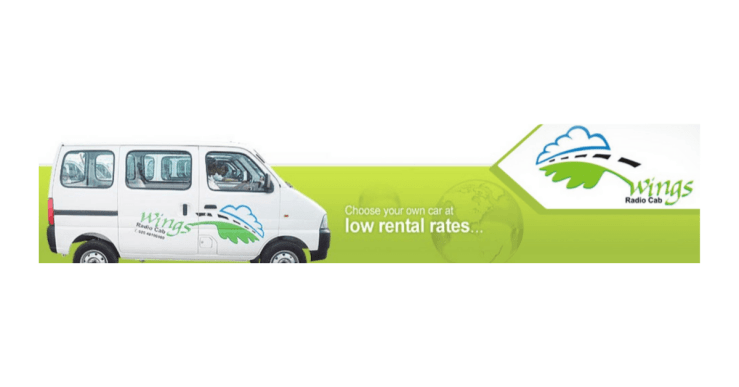 This is the question that pops into my mind each time I visit cities like Bangalore, Chennai etc. Over there, call taxis are a way of life, especially due to the convenience of the taxis and high handedness + rude behaviour of the auto drivers.

We were to board an early morning Kingfisher flight to Bangalore yesterday, and I decided to try out Wings Radio Cabs. I’d seen the number displayed on a cab and stored it in my phone. I called them a couple of days before and gave details about the reporting time and address, both for the onward and return commute from the airport. This is a 24X7 service, and you can call them on 4010 0100. Check out their website as well.

Well, the driver came inside the society premises on time but goofed up with the building alphabet, and then his cellphone conked off. Luckily, a delay of not more than 10 minutes. When we told him we wanted to place the bags in the back, it was amazing to see among his own personal stuff, a BUCKET for chrissakes! 🙂

To top it all, this being a Wagon R (CNG), the gas kit and spare tyre hardly left any room for our luggage, but somehow we managed and made it to the airport well in time.

The ride was pretty comfortable and this was an AC vehicle. (Update: Ditto for the return from the airport a few days later. The fare on each trip was ~ Rs.230, a pretty reasonable amount). Which brings me back to my original question: Will call taxis dent the auto rickshaw network in Pune?

In the near future, I think not. Call taxis charge Rs.16 per km (minimum fare – 3 kms), which is quite steep and by the way compares poorly with the Rs.14-15 charged by a Bangalore cab, and that too for a larger car (for eg. Renault Logan). Autos will continue to rule for short distances, where cost and not convenience is the major factor. Of course, if convenience and comfort (AC) matter, then call taxi it is.

The other problem is that we often find it easier to make a plan, step out of the house and hail the nearest auto in sight whereas waiting for 15-20 minutes to half an hour for the cab to arrive can upset plans at times, especially if you want to get moving quickly. All dressed and nowhere to go! 🙂

In the long run, however, I really hope they replace autos, if not for anything else, then just so that these arrogant auto-wallah SOB’s get a real kick up their rear, what with their high handedness, refusal to ply certain routes and refusal to charge by the meter some times.

Not an easy task, and involves changing the mindset of people for whom the auto rickshaw is a habit. Let us see, time will tell if radio cabs make a dent in the auto network 🙂