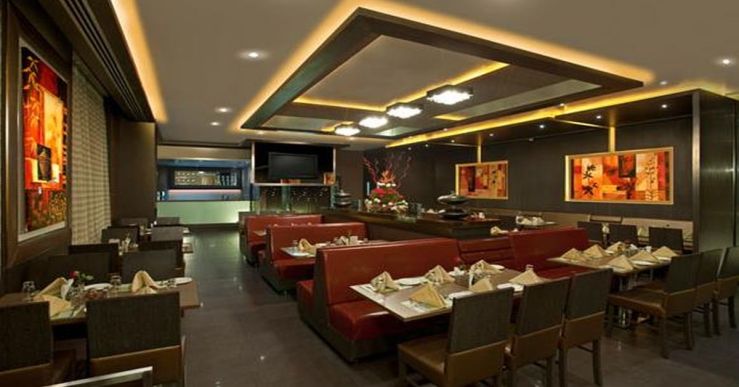 Was meeting a good friend for dinner after quite a while as she’d been busy the past few weeks. This time around, the plan was to eat at a place neither of us had been to before. However, by the time we set out, owing to time constraints we decided to visit one of the usual haunts like Dario’s or Squisito.

We had crossed Camp when I casually mentioned that I’d been meaning for us to check out this all-veg place in Kalyani Nagar called Cream Centre. Of course, as I hadn’t been there, I had no idea of exact location, seating, ordering+serving time etc.

It took us just a minute to decide. Also, as she’s a vegetarian, Cream Centre (all-veg) seemed like an obvious, if intriguing choice. Had heard about it from friends in Bombay but surprisingly, not much buzz in Pune. Maybe the veg bit had to do with it? :p

As we drove towards Kalyani Nagar, we overshot by a bit before Google Maps came to the rescue. Cream Centre is located in the lane which has Marrakesh and Bounty Sizzlers. As you enter the lane and go in further, it feels like such a totally residential area that it’s hardly surprising I had no clue it existed there. It is a part of Hotel Cypress, and the entrance is from the left side as you face it. They have outdoor as well as indoor AC seating. 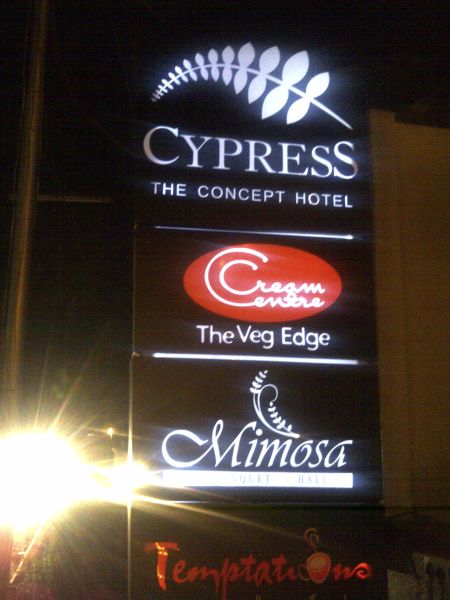 We thought sitting outside was a better idea but the hostess said it wasn’t open yet, and proceeded to guide us inside, where we were led to a table for two by the side. The interiors are pleasant and the red leather bit on the sofas for family seating reminded me of the decor at TGIF outlets.

As we sat down to have a look at the menu, the first thing I saw was a sheet with various puzzles and a couple of pencils beside it. Elementary stuff like spotting differences between two pictures, but a fun activity nevertheless. It reminded me of the games at Touché, Bangalore. 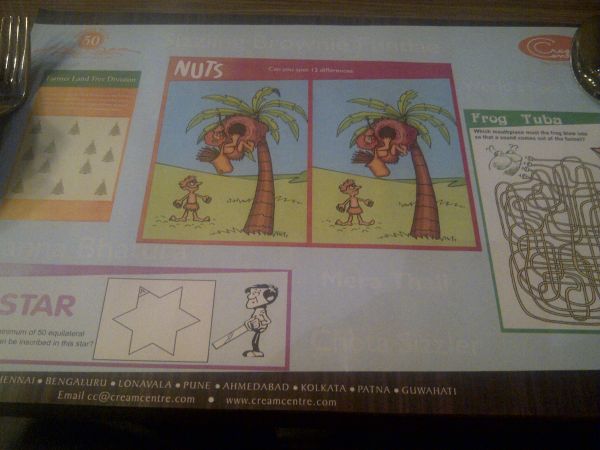 The menu is a thick and chunky book with some mouth watering pictures of all the food on offer. They have a pretty diverse menu and it is not possible to do justice to all the food at one sitting. They claim to make the ‘World’s Best Nachos‘ so ordering that was a no-brainer. We also ordered Babycorn Crisps, which sounded appetising. The pizzas and desserts looked yummy too. 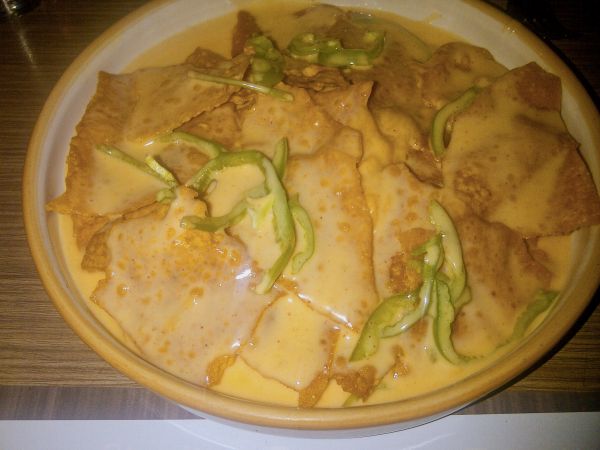 I don’t know about ‘World’s Best’ but they were definitely the best nachos I’d eaten in a long long time. We just couldn’t keep our hands off them and all that lovely melted cheese (we both love cheese), as well as the salsa dip. Absolutely lip smacking to the extent of licking off that cheese from our fingers 🙂 (The picture doesn’t quite do justice to it) 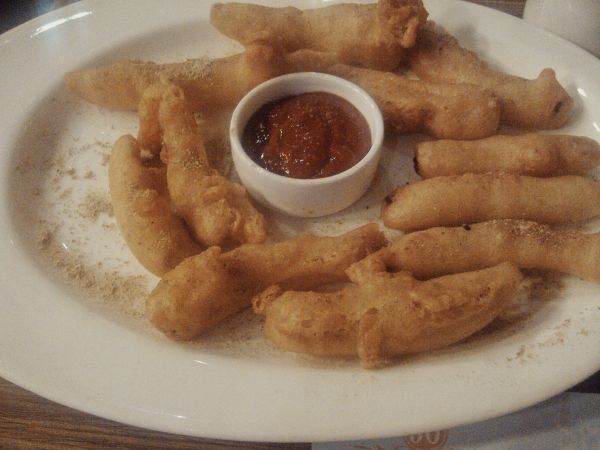 The Babycorn Crisps were nice, though a tad too ‘peppery’ in some places. The dip served with it was good too, but both of us kept eating the crisps with the melted cheese from the nachos.They were an ideal snack though, and I liked that they stayed crisp for quite a while and didn’t become soggy.

By now, the place was slowly getting packed, probably the Sunday crowd – which means we arrived at just the right time. Must say between the conversation and these starters, we were feeling quite full already. Question was: skip mains and order dessert directly or check out the offerings in the main course.

At that time, we certainly didn’t want to have Ragda Pattice, Chana Bhatura, Chaats, some Lebanese stuff, Soup/Salad/Sandwich combo, Sizzlers and the like and even pasta had a ‘heavy’ feel about it. However, one look at the pizza options and we decided to go for it. The steward helped matters by saying it was extremely lightweight and thin crust, so Classic Veg Pizza was ordered. 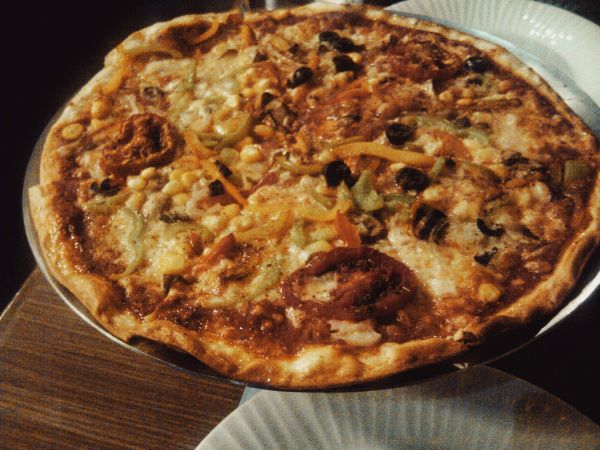 It looked delicious, but we both agreed that the pizza was the let down of the evening. Too salty at some places, totally bland at others, it lacked taste and flavour, and we ended up actually craving a Domino’s Cheese Burst 😉

The other weird thing was having our fingers covered with flour from the pizza base, which I found quite surprising (and messy). Never seen this at any pizza outlet. We decided to parcel the remaining slices.

Wish we’d ordered dessert directly after the starters – the sizzling brownie and triple chocolate sundae we saw others having looked droolicious.

It’s a nice place with good and decently priced food (Our bill came to just over Rs.650). The service was attentive too. It is a veg-only place though, so keep that in mind if you’re heading there.